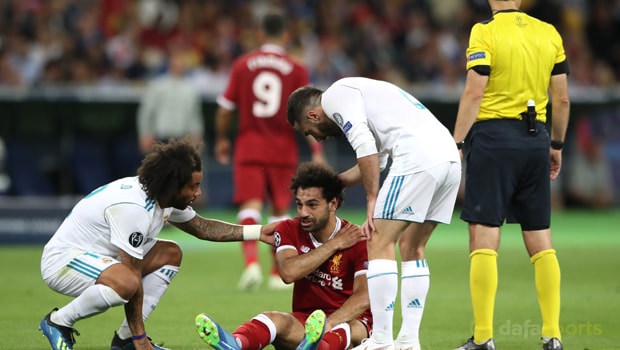 Liverpool forward Mohamed Salah says he is confident of playing at the 2018 World Cup despite picking up a serious injury in the Champions League final loss to Real Madrid.

Salah has been in outstanding form for the Reds this season, having scored 44 goals across all competitions, and many thought he could be the difference in whether Liverpool lifted the European trophy in Kiev on Saturday night.

However, optimism turned to despair when the Egypt international was forced to leave the field of play in the first half after sustained what appeared to be a dislocated shoulder.

The 25-year-old was in tears when being helped from the pitch and he could only watch on as Los Blancos clinched a third successive Champions League title with a 3-1 victory.

It was a bitterly disappointing night for Jurgen Klopp’s men but Egypt, drawn in Group A at the World Cup, are wondering whether they will have their talisman available for Russia.

Encouragingly, for club and country, Salah was in high spirits just 24 hours after the loss to Madrid, posting a defiant message on Twitter.

“It was a very tough night, but I’m a fighter,” he tweeted.

“Despite the odds, I’m confident that I’ll be in Russia to make you all proud. Your love and support will give me the strength I need.”

Egypt have been drawn alongside hosts Russia, Saudi Arabia and Uruguay for the World Cup and the Pharaohs are priced at 6.50 to top their pool.

Salah, on the back of his outstanding season, is 41.00 to finish as the tournament’s top goalscorer.