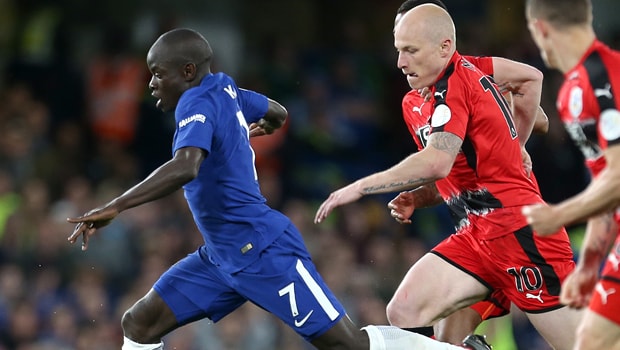 N’Golo Kante insists France are under no extra pressure to deliver at the 2018 World Cup in Russia after falling to Portugal in the 2016 European Championship final.

Much was expected from hosts France two years ago at the European Championships but they were unable to deliver as they went down 1-0 to Portugal in the final in extra-time.

France have arguably one of the most talented squads in Russia this summer and many people tipped Didier Deschamps’ men to go all the way at the start of the 2018 World Cup.

Les Bleus managed to top Group C, having picked up victories over Australia and Peru before drawing with Denmark, but the manner of their performances have left question marks going into the knockout stages.

The displays have been more workmanlike than entertaining and head coach Deschamps has, so far, been unable to get the best out of the likes of Kylian Mbappe, Antoine Griezmann and Paul Pogba.

France have been handed a tricky last-16 clash against Argentina, who have won all four previous meeting against Les Bleus, but Kante insists his side are not feeling any nerves.

“We don’t feel too much pressure,” he told Standard Sport.

“We all knew before the competition that we have a good squad and we want to give our best. We didn’t feel too much pressure.

“We just wanted to give our best for the next game and the last 16. We deserve first position because we had three good games.”