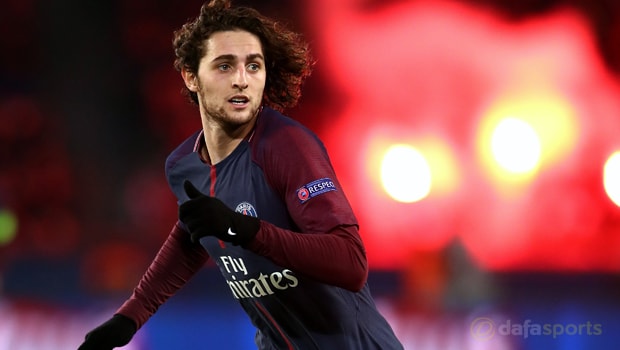 Paris St-Germain midfielder Adrien Rabiot has declined to go on standby after being omitted from the French World Cup squad for Russia.

The 23-year-old was one of 11 players named by Les Bleus boss Didier Deschamps as potential replacements should anything untoward happen to those in his 23-man panel before the cut-off point early next month.

Deschamps outlined a training plan for the standby players to follow, lest they would be ready to step into the squad at short notice, but Rabiot is understood to have informed the coach via email that he wouldn’t be able to follow the plan.

Rabiot has six caps for France and was part of PSG’s treble-winning squad last season, making 45 appearances in all competitions.

His form tailed off somewhat after the Ligue 1 outfit were knocked out of the Champions League by Real Madrid at the last-16 stage.

Noel le Graet, president of the France Football Federation, labelled Rabiot’s decision as “surprising” before adding that the ramifications would be self-harming for the player.

“Rabiot is a high-quality player and an endearing boy who has always behaved well in national selections where he has evolved,” said le Graet.

“His disappointment does not allow him to give up and not to serve the France team. To be part of the collective of France, to be among the best French players, is a chance and a privilege in the career of a player.

“He made a bad decision. He penalises himself and sanctions himself alone.”

France are 7.50 to win the World Cup, while Les Bleus are 4.00 to be knocked out in the quarter-finals.