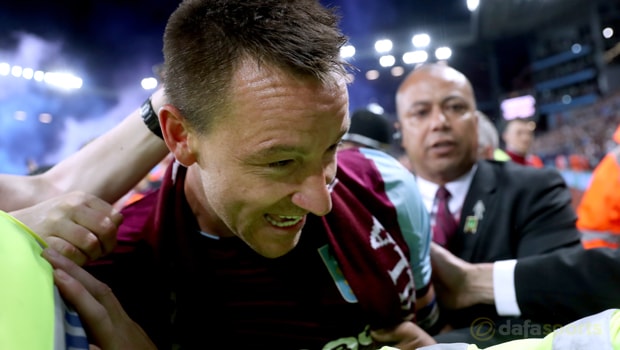 Steve Bruce has paid tribute to the impact John Terry has made on Aston Villa as a club this season.

The veteran defender opted to join the midlands outfit after leaving his beloved Chelsea and Villa are now 90 minutes away from securing a Premier League return as they face Fulham in Saturday’s Playoff Final at Wembley.

Bruce insists he knew what he was getting when taking Terry to the club, and he hasn’t been disappointed with the former England skipper. “He has been vital,” said Bruce.

“For me (Jack) Grealish has looked to him and thought, ‘God, if I’ve got to be like that to be a top player…’ and that’s what we brought him in for.

Not just to win a game on a Saturday, but his overall…and he has never let us down.”

Terry, now 37, is a natural leader in any team according to Bruce, something he feels England are not producing as much as they should be.

“I just knew what he would give. Let’s be fair, he has been one of the great defenders of our country,” the manager added. “He is a great leader of men, which we don’t produce many of any more.

In a quiet way, he is not a ranter and a raver, he is not one who puts heads through doors. He is calm.”

Should Villa overcome Fulham and end their two-year hiatus from the top flight, it will see a one-year extension activated on Terry’s deal at the club and Bruce added that he “genuinely hope he triggers it”.

Aston Villa are 3.25 to win the Championship Playoff Final on Saturday, with Fulham favourites at 2.25 and the draw priced at 3.10.