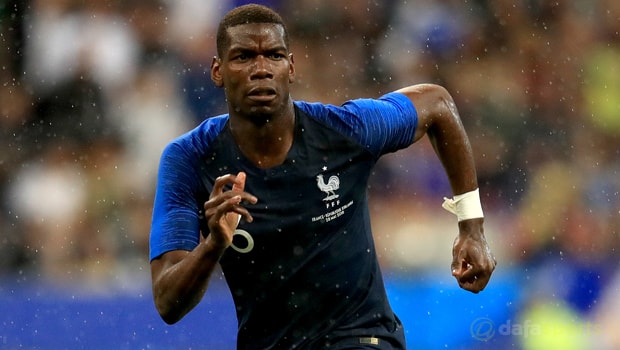 France boss Didier Deschamps has defended midfielder Paul Pogba after he was jeered during the 3-1 friendly win over Italy in Nice.

Manchester United midfielder Pogba was jeered by a section of home fans in the second half after a misplaced pass, and again when he was replaced by Steven N’Zonzi with five minutes remaining.

Deschamps felt the jeers were coming not just towards Pogba, but in general at his team.

He suggested some fans have a high and unrealistic expectancy level of the national team.

“The whistles for Paul Pogba? It’s not just for him, at one point we kept the ball and they whistled too,” France manager Deschamps told TF1.

“It had already happened. “The public also prefers to score five, six goals but it’s high level, there is a team in front of us. The players do the right thing.

“Are they affected or not, I do not know…I will not remember that, but if it maybe could not be the case, it would be better.”

Antoine Griezmann also defended his teammate, though the Atletico Madrid forward admitted Pogba has endured a testing season for his club.

“We’re all playing for the same shirt. He plays his game, you’re used to him scoring. We don’t expect that from him, only that he rotates the ball and plays for the team,” Griezmann said.

“He has had a difficult season at Manchester United but he has a lot of confidence in himself.”

Griezmann is 2.50 to be leading goalscorer for France at the World Cup, while Les Bleus are 7.50 to win the tournament.