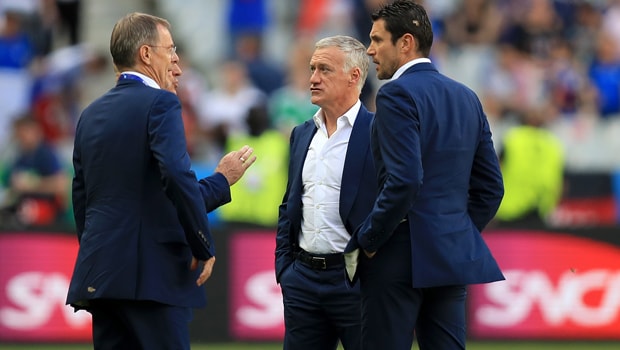 France coach Didier Deschamps declared himself satisfied after they edged past Peru 1-0 to book a last-16 spot at the World Cup in Russia.

Kylian Mbappe scored the only goal of the game shortly after the half-hour mark, tapping in from close range after Olivier Giroud’s deflected shot had flown over the Peruvian goalkeeper.

France were on top for the first half but Peru responded in kind after the break and will be wondering how they’ve avoided scoring a goal in their games against France and Denmark.

Ricardo Gareca’s side pushed hard in the second half but ultimately could not find the equaliser that would have prevented their exit from the tournament.

Pedro Aquino went closest to levelling when his stunning strike cannoned off the bar.

For France, the win came after a stuttering opening day 2-1 success against Australia.

Deschamps’ team will top the section if they avoid defeat against Denmark in their final game next week and the coach is content with their progress.

“We are in the knockout stages so we are very satisfied,” said Deschamps.

“It was tougher in the second period. We played a better game in the first half – it was more fluid and flowing. However, we were solid after the break which helped us get this result.

“The defending doesn’t just come from the defence – the attacking players helped the team be more compact. This aided with the recovering of the ball in the first half – less so in the second half.”

France are 8.00 to win the World Cup and 3.75 to be eliminated in the quarter-finals.