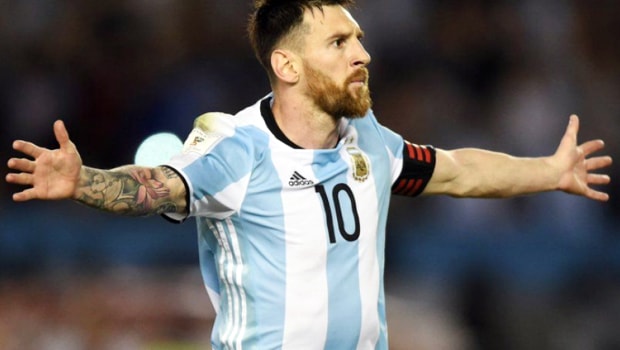 Lionel Messi scored a hat-trick as Argentina booked their place at next summer’s World Cup with a hard-fought 3-1 victory over Ecuador in Quito.

La Albiceleste went into their final match of the CONMEBOL qualifying campaign in sixth position in the standings, with only the top-four nations guaranteed their place at Russia next summer, while the fifth-place side would secure a play-off berth.

That meant Argentina needed a victory against Ecuador to guarantee themselves at least a play-off place, but they got off to a disastrous start at the Estadio Olimpico Atahualpa, conceding inside the opening minute to Romario Ibarra’s strike.

However, Barcelona ace Messi stole the show after that, netting in the 11th, 18th and 62nd minutes to seal Argentina’s place at their 12th successive World Cup and he admitted after the match that it would have been wrong for the two-time winners to miss out.

“There was always the fear of coming here to play. Luckily, we could react and we managed to play well,” Messi told reporters.

“We were calm, we achieved the goal and that is the most important thing. Thanks to God, we fulfilled the objective.

“It would have been crazy not to be in the World Cup. The group deserved to qualify.”

Argentina are priced at 9.50 to win the World Cup and they will be joined at next summer’s finals by Brazil, Uruguay and Colombia, while Peru will face New Zealand in the two-legged inter-confederation play-off next month.