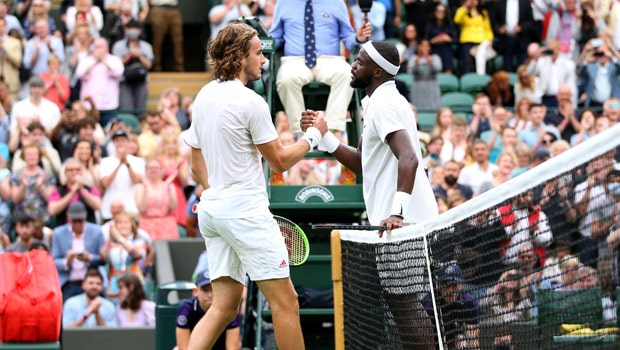 Third seed Stefanos Tsitsipas was among the big names that were to be looked at the Wimbledon 2021. But the Greek lost in the first round in straight sets (6-4, 6-4, 6-3) to Frances Tiafoe of the United States.

The 22 year old Greek was on the top of his game not a month earlier when he reached the final of French open 2021, where he took the lead of 2-0, but could not manage to stop World no. 1 Novak Djokovic and lost the last three sets. But Tsitsipas was in complete contrast to his Roland Garros form and has now lost in the first round at Wimbledon on three occasions.

Frances Tiafoe, the world number 57 from the United States of America, did not let Greek take on any advantage and managed to break in the last set to take a decisive lead and later went on to win the set 6-3 against Stefanos. The American won the game in three straight sets and stunned many experts.

Tsitsipas, who lost his Grandmother only hours before French open final against Novak, could not show his top game against Frances Tiafoe, who kept the pressure on the Greek.

World number 57 Tiafoe will face the winner of Vasek Pospisil or Roberto Carballes Baena for a place in the last 32.

Tiafoe also admitted the fact that he’s had some problems, but also emphasised that this is what he can do, “I really, really hope he can take it on from here”, further adds Frances.