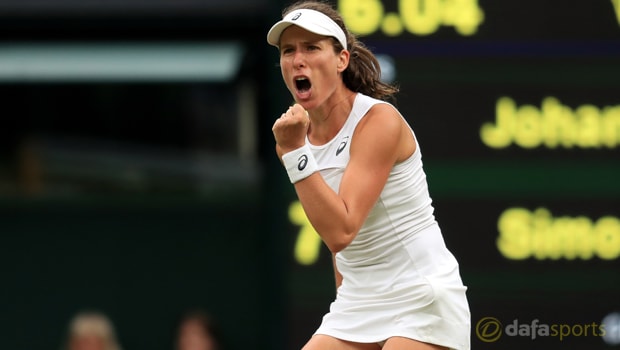 Johanna Konta says she is confident of going all the way at Wimbledon this year and Britain’s number one is remaining fully focused after making history on Tuesday.

Konta, who had never gone past the second round at the All England Club prior to this year’s tournament, produced a magnificent performance to knock Romanian Simona Halep out at the quarter-final stage, winning 6-7 7-6 6-4 on Tuesday.

The 26-year-old, who has matched her best run in a Grand Slam by reaching the last four, became Britain’s first women’s Wimbledon semi-finalist for 39 years, matching Virginia Wade’s 1978 feat.

On Thursday the world number seven will be looking to continue her run when she goes head-to-head with American Venus Williams, who ousted French Open champion Jelena Ostapenko on Tuesday.

The 37-year-old, who is the older sister of Serena, has won the title at SW19 five times and she was beaten in the final last year, losing to her younger sibling on Centre Court.

Konta, who is 3.25 to lift the trophy, is feeling positive ahead of the semi-final clash as she aims to break her Grand Slam duck in front of an expectant crowd this week.

“Ever since I was nine years old I’ve believed in my own ability and dreamed big,” she told BBC Sport.

“I don’t give myself too much time to dream and more focus on the work. I just stuck to my true self.”

Konta, who is a three-time WTA Tour winner, is the narrow 1.80 favourite to advance into the final, while Williams, who is 4.00 to triumph for a sixth time in London, is a 2.05 chance to make it into a second consecutive Wimbledon final.