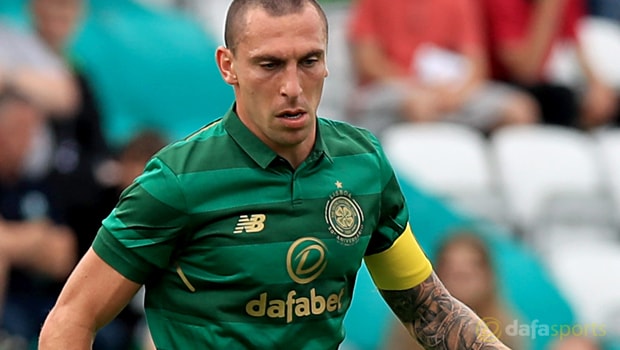 Scott Brown has confirmed he will be available to face Linfield in the second round of Champions League qualifiers on Friday and the Celtic captain is expecting a tough battle.

Celtic, who went undefeated in the Scottish Premiership last season, travel to Belfast for the first leg of the qualifier as the club aim to reach the group stages of the Champions League for a second straight campaign.

The Bhoys warmed up for the contest in fantastic fashion as they thrashed Shamrock Rovers 9-0 in a friendly last Saturday, but there was one slight worry after the game.

Scotland international Brown was forced to come off after picking up a knock and there were worries the skipper would not be fit enough to compete against Linfield.

However, the 32-year-old has dispelled fears about his condition and he is looking forward to lining up against an opposition on Friday that he believes will aim to break up the play as much as they can. “I’ll be fine.

It was just a slight wee problem but nothing to worry about,” he said.

They (Linfield) will want to make it a battle because of the way we play football and they’re going to try and stop us and close us down early doors.

“But when you look at our squad, we’ve got some great players that can deal with the pressure and have dealt with that kind of pressure in the past.”

Celtic are the firm 1.07 favourites to pick up the win on Friday, the draw is priced at 29.00 while Linfield are a 9.50 shot to cause what would be a massive shock against the Scottish champions.

The Bhoys also confirmed on Wednesday the signing of Olivier Ntcham from Manchester City and the midfielder has put pen-to-paper on a four-year deal.