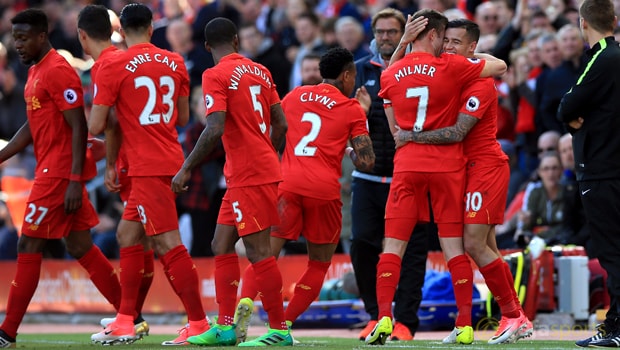 Philippe Coutinho says the entire Liverpool squad are in confident mood ahead of the new Premier League season and the Brazilian is hoping to pick up some silverware.

Liverpool were right in the hunt for three trophies in January but a dreadful start to the year saw the Reds get knocked out of the FA Cup and EFL Cup.

They also lost too much ground in the race for the Premier League title but they were eventually able to clinch fourth position, securing a place in the Champions League play-off round in the process on the final day of the season.

Preparations are now well underway for the upcoming campaign and German tactician Jurgen Klopp is busy trying to strengthen his squad.

Mohamed Salah has been brought in from Roma for an initial 42million euros, while England Under-21 international Dominic Solanke arrived from Chelsea on a free transfer, although a compensation fee will have to be paid to the Blues.

Coutinho recently re-joined his Liverpool team-mates after being given an extended break due to his international commitments and he is optimistic of enjoying a better season this time round.

“I am working, every day I try to improve and I hope this season I can do even better than the last season, I am always aiming to improve.” he told the club’s official website.

“It was a good season. Of course, we wanted to win something, but we are ready here to start again to do everything to have a better season.

“Everyone has big confidence and this is the key for the players. I am confident – I think everyone is.”

Liverpool, who are 12.00 to win the Premier League title in 2017-18, open their season with a trip to Vicarage Road on August 12 to take on Watford, who are now managed by Marco Silva.

The Hornets are 5.25 outsiders to pick up all three points, a draw is priced at 4.00 while the visitors are the firm 1.62 favourites to kick off with a win.