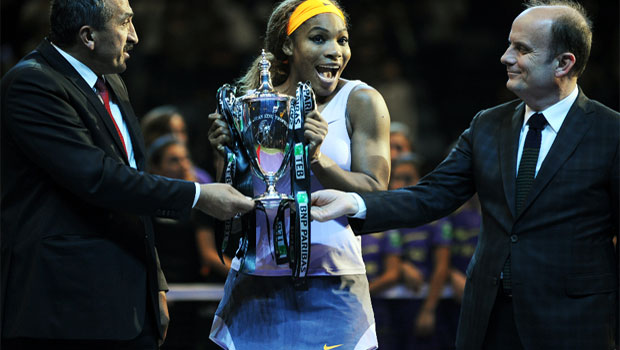 Williams had to recover from losing the first set as the world number three from China got off to a flying start in Instanbul, but she soon levelled the match before wrapping up the win in two hours and nine minutes.

It was Williams’ fourth WTA Championships success and capped off a memorable year as she became just the eighth female player to win 11 or more titles in a season.

Speaking after the victory, Williams also admitted lifting the Billie Jean King trophy had special significance as the WTA celebrated its 40th anniversary.

“It was an awesome year of tennis,” she said. “To end with the Billie Jean King trophy after 40 years and after everything we had the celebration for this year, I don’t know if it’s written or what, but it’s just really exciting,” she said.

“I haven’t had a lot of time to think about it, but I’m happy. I’m really happy that I was able to finish it off.”

Williams also admitted the year took its toll on her and she had to dig deep to come through against a very tough opponent.

“I’ve just had a really long year, and I’m just really excited, honestly. I really didn’t expect to get through this match today,” Williams added.

“I can’t believe I won. I was so tired. Honestly, did I really win? Because she played so well.”

Li, 31, who served 10 double faults in total, also admitted she ran out of gas.

“I was feeling maybe the start of the match was too exciting,” she added. “So after one and a half sets I was feeling I had no more energy left.”