Posted by Daniel Martin on September 7, 2014 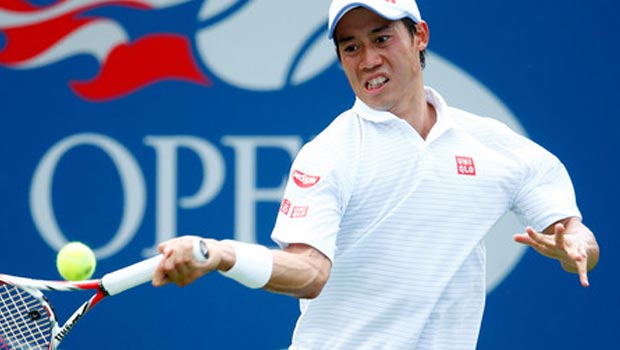 Kei Nishikori and Marin Cilic will contest Monday’s US Open final at Flushing Meadows after dumping out world number one Novak Djokovic and five-time champion Roger Federer in the semi-finals respectively.

The 24-year-old 10th seed Nishikori, who is coached by former player Michael Chang, became Japan’s first Grand Slam finalist as he recovered from losing the second set heavily against Djokovic to romp to an impressive 6-4 1-6 7-6 (7-4) 6-3 win on Saturday.

“It’s just an amazing feeling, beating the number one player,” said Nishikori, who also picked up impressive victories against Milos Raonic and Stan Wawrinka on his way to the semi-finals.

“I hope it’s big news in Japan. I feel the support from Japan. It’s 4 o’clock in the morning but I hope a lot of people are watching.”

Nishikori will now go up against 25-year-old world number 16 Cilic in the final after the Croatian stunned Swiss star and 17-time Grand Slam winner Federer in their last-four showdown.

“It’s just an amazing day for me,” said Cilic, who had never beaten Federer in five previous meetings.

“To be able to play like this I never dreamed of and I think today was my best performance ever in my career.

“Considering also that even when I was a set up and break up, the crowd was rooting for Roger to come back.

“It wasn’t easy to deal with that, but I felt that my serve helped me a lot today, to get some free points to breathe a little bit easier. It was working perfectly.”

Cilic is now 2.04 on the Money Line to win the first Grand Slam final without Federer, Djokovic or Rafael Nadal since the 2005 Australian Open, while Nishikori is 1.80.