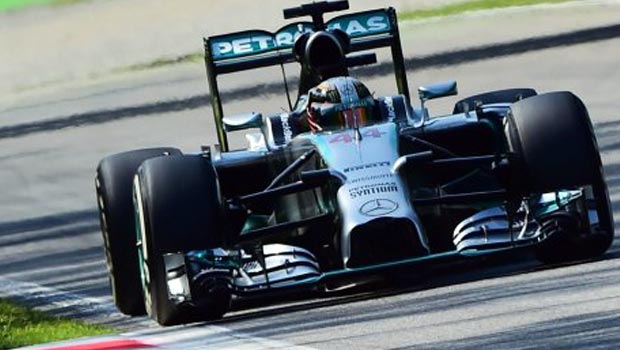 Mercedes driver Lewis Hamilton will lead from the front at Sunday’s Italian Grand Prix at Monza after securing his first pole position for eight races.

The British 2008 world champion, who is aiming to overhaul team-mate Nico Rosberg’s 29-point lead over him in the battle for the drivers’ championship, sealed pole thanks to an impressive lap time of one minute 24.109 seconds.

Rosberg, who had claimed pole position in six of the last seven races since Hamilton was at the front of the grid at the Spanish Grand Prix in May, did ensure Mercedes will have their seventh front-row lock-out of the campaign.

An “excited” Hamilton is now looking forward to Sunday’s race as he looks to get himself back into contention to win a second world title.

He said: “I’m very proud of my side of the garage because they’ve also been through a difficult time with me – but each time they’ve bounced back.”

After Hamilton and Rosberg collided in their previous race in Belgium, which resulted in the Briton retiring from the race, he vowed not to do “anything silly” in Italy.

He added: “Nothing changes for me. I’ve been racing for many years and I’ve not collided with too many people so I’ll just continue to race the way I do. I just want to win the right way and I’ll try to do it that way.”

Meanwhile, an all-Williams second row is spearheaded by Valtteri Bottas ahead of Felipe Massa, while McLaren claimed fifth and sixth, with Kevin Magnussen ahead of Jenson Button by just 0.065secs.

Fernando Alonso is seventh for Ferrari in their home race, with Red Bull pair Sebastian Vettel and Daniel Ricciardo, who forced his way back into contention with wins in the last two races, eighth and ninth respectively ahead of Force India’s Sergio Perez.