Tomas Berdych pulls out of Wimbledon 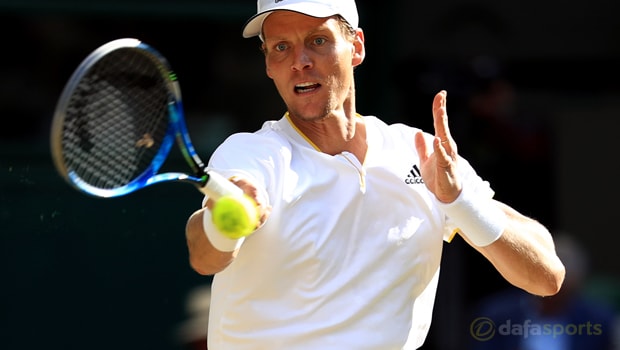 World number 19 Tomas Berdych has been forced to pull out of Wimbledon this year after picking up a back injury.

Berdych had reached the semi-finals at the All England Club the past two years and there was a real hope he could reach the final this year for the first time since 2010.

However, the Czech Republic star has revealed he has been suffering from back pain for “a couple of months” and will not be able to compete at SW19 this time around.

“I was very much looking forward to Wimbledon,” Berdych posted on social media.

“My attempts to get ready for the grass season were not successful.”

It is thought the 32-year-old, who reached the quarter-finals of the Mercedes Cup last time out, will be absent for several weeks as he aims to overcome the troublesome injury.

The 13-time ATP Tour winner has struggled for form so far this year, with a run to the semi-final stage of the Open 13 Provence back in February his best result in 2018.

British number one Andy Murray could join Berdych in missing Wimbledon, which runs from July 2-15, after the three-time Grand Slam champion only recently returned to competitive action from a hip injury.

The 31-year-old, who hinted he could miss the grass-court event, continues his comeback at Eastbourne next week with a tricky first-round match against Switzerland’s Stan Wawrinka.

Both players are wildcards at the Nature Valley International as they continue their recovery from injury and the duo will be hoping to gather some form and fitness ahead of a possible tilt for Wimbledon glory.