Australian Open: No sweat for Novak 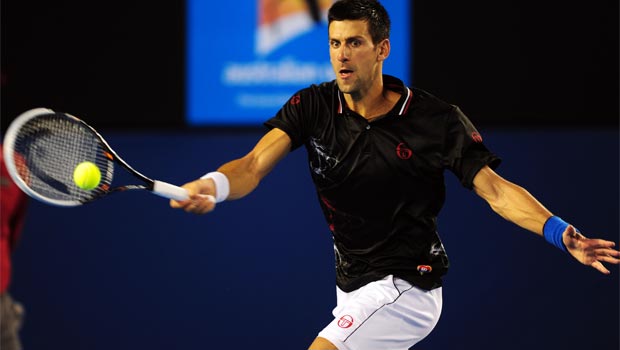 Novak Djokovic remains firmly on course for a fourth consecutive Australian Open success after cruising through to the quarter-finals on Sunday.

The Serbian took just one hour and 33 minutes to record a straight-sets victory over Italian Fabio Fognini, the scoreline of 6-3 6-0 6-2 barely doing justice to Djokovic’s overwhelming superiority.

The win takes him a step closer to a meeting with the only man capable of stopping him in this sort of form, Rafael Nadal, who just 24 hours earlier had disposed of Gael Monfils in similar fashion.

However, Djokovic has now gone 28 matches unbeaten since losing to Nadal in the US Open, and is high in confidence at present.

“I felt from the start that I’ve been elevating my game as the tournament is going on. Every match is better, he said.

“The general feeling on the court, all the shots, using the court position really well, being aggressive, playing my style of the game.

“That’s what I’ve done really well today overall from the first to the last point. I haven’t allowed my opponent to come back to the match.

“Mentally I was there. I was tough. I was focused. I feel great about myself in this moment.

“There is this confidence that I carry from many wins that I had in the last two months of the 2013 season, and I started off this season in a good style. I’m trying to keep it up.”

Next up for Djokovic is the man that took him to 12-10 in the fifth set of their fourth round tie last year, Stanislas Wawrinka, who got the better of Tommy Robredo in a close encounter late on Sunday evening, emerging victorious 6-3 7-6 7-6.