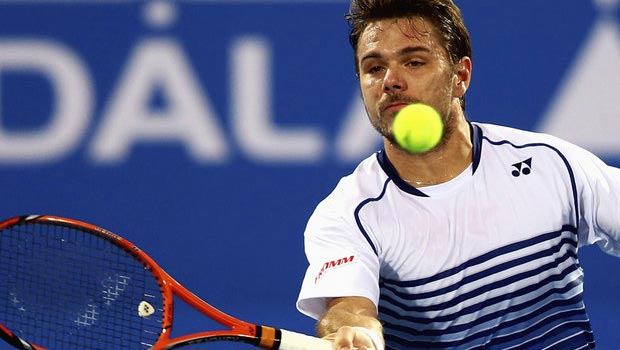 Top seed Stanislas Wawrinka is feeling positive about 2015 after a solid performance in his season-opening victory over Borna Coric at the Chennai Open.

The Swiss world number four began the defence of his title in India with a dominant 6-1 6-4 victory over Coric to reach the quarter-finals.

He gave his 18-year-old Croatian opponent – the youngest player in the top 100 – a lesson at the Numgambakkam Tennis Centre as he raced into a 5-0 lead in the first set and seized a crucial break in the seventh game of the second to win.

Despite wasting four match points with a series of lazy returns, the 29-year-old was delighted with the way he began the new season.

“I am really happy to start this way,” said Wawrinka, who will begin the defence of his Australian Open title later this month.

“I played a solid, aggressive match. I made him run around and my backhand worked well. This is a good sign and very satisfying.

“For sure Coric is a good player. He is young and has already made his mark. It was not easy out there. That is why I am happy with the way I played today.”

The 31-year-old from Luxembourg is still searching for his first professional title but Wawrinka expects a tough match.

“Muller is a completely a different player,” he added. “He is known for serving big and making a lot of serve and volley. I will have to play really well if I have to beat him.”

Wawrinka is 1.22 to win Friday’s quarter-final overall and is priced at 1.30 to win the first set.