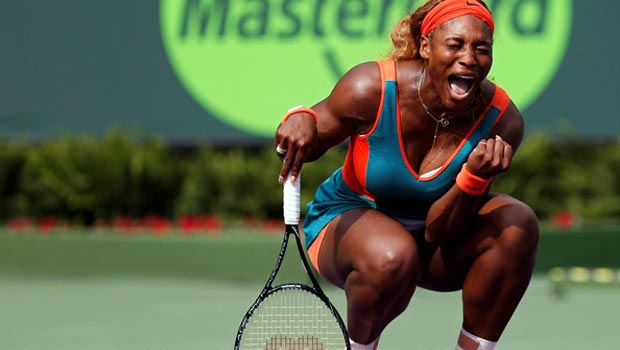 Serena Williams overcame the blistering heat and strong opposition in France’s Caroline Garcia to progress 6-4 4-6 6-4 at the Sony Open in Miami.

Serena, who has not been at her best in the tournament so far, was given a scare but managed to prevail after two-and-a-half hours of gruelling tennis.

Speaking to wtatennis.com, the world number one stated: “Granted, she played great, but I really gave myself a tremendous amount of trouble out there too. I made so many unforced errors, I hit so short… it really isn’t the same player. I really just have to do better.”

Williams will now face Coco Vandeweghe in the fourth round after her compatriot pulled off an upset against 16th seed Sam Stosur in the third round, running out the eventual winner 5-7 7-5 7-5 in what was a very tight affair.

Fourth seed Maria Sharapova also needed three sets to progress, eventually going through 6-4 6-7 (7-9) 6-2 against Lucie Safarova, who managed to save six match points over the course of the contest.

The 26-year-old Sharapova paid tribute to her opponent, saying: “It was one of those days. I had chances but she kept hitting incredible shots, like winners on match point.”

The Russian will face Kirsten Flipkens in the next round, after the Belgian was given a walkover in the third due to Sabine Lisicki dropping out through injury.

Sunday’s play will see 1.18 favourite Venus Williams go up against Australian Casey Dellacqua, a 5.00 outsider, while exciting American prospect Sloane Stephens is the 2.11 underdog for the pick of today’s clashes when she plays Denmark’s Caroline Wozniacki.