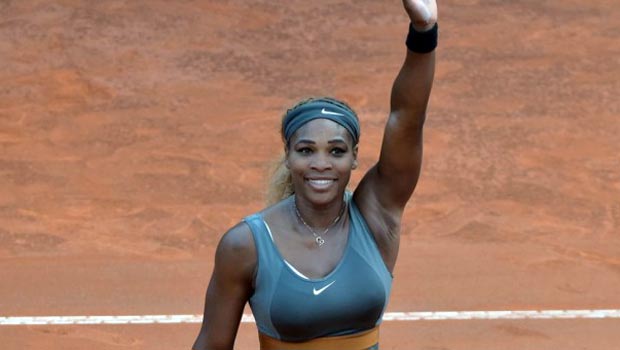 Serena Williams is in a relaxed mood as she prepares for the defence of her French Open title later this month.

Williams won the Rome Masters on Sunday to pick up her third title of the year, following successes at the Brisbane International in January and the Sony Open in Miami in March.

The world number one will now set her sights on Roland Garros, where she will be defending only her second ever French Open title.

Williams won the 2013 event by beating Maria Sharapova in the final, her only other victory at the French Open coming in 2002 when she overcame sister Venus.

Williams will also be hoping for a better showing in the second Grand Slam of the year after being beaten by Ana Ivanovic in the fourth round of the Australian Open.

Nevertheless, she is relaxed and has credited her calmness for her successful 2013 season when she picked up 11 titles.
“Usually I’m like, ‘Oh my God, I have to defend,'” Williams told USA Today.

“This time I’m going to be cool with it. I’ve been feeling that way for a while now. I think that’s a good way to feel, since I have so many titles that I won last year.

“I’m not too detached. It’s more a calming. I’m taking things in my stride as opposed to expecting things that are to come.”

The French Open may be Williams’ least successful Grand Slam but there are positive omens for the American this year.

The 17-time Grand Slam champion’s two previous wins at the Rome Masters were both followed by victories at the French.

Williams is the favourite to win the event at Roland Garros with a price of 2.15. Ivanovic, her conqueror in Melbourne, is 15.00.

The French Open begins on Sunday, May 25, with the women’s final to be held on Saturday, June 7.