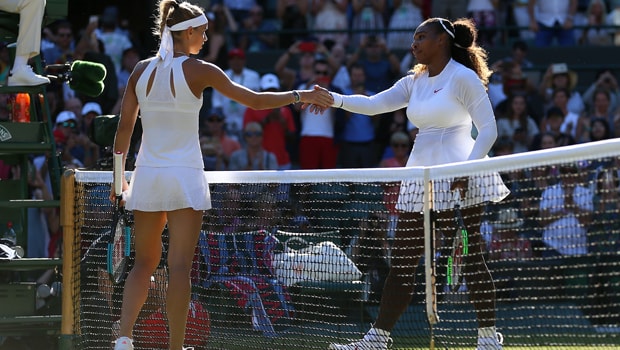 Serena Williams may have sealed her place in round two at Wimbledon with a victory over Arantxa Rus but insists she must improve to mount a serious challenge for the title.

The American is still getting back into the swing of things after taking time out following the birth of her daughter and she looked far from her best on Monday.

However, Williams, who is priced at 6.00 to win Wimbledon outright, still managed to find a way past her Dutch opponent to prevail 7-5 6-3 and set up a second-round tie with Bulgarian qualifier Viktoriya Tomova.

Williams easily held her serve in the first set but had to show some fighting spirit in the second to battle her way back from a break down at SW19.

The 23-time Grand Slam champion had to contend with tough conditions on Court 2 and she feels that experience will stand her in good stead for the rest of the campaign.

Williams said: “I wasn’t quite used to that level of wind.

“Looking back I’m glad I had that wind as in the future I will be able to play a bit better.”

The world number 181 felt that it took some time to settle down into the match and admits she will need to step up her game in order to lift an eighth Wimbledon crown.

She added: “I feel like I maybe was just overly anxious and overly, over-trying, overdoing it [earlier].

“But towards the end, I definitely was more calm, just making my shots, just playing a more serene game.

“I’m happy to get through that, I didn’t play my best but I will get there.”