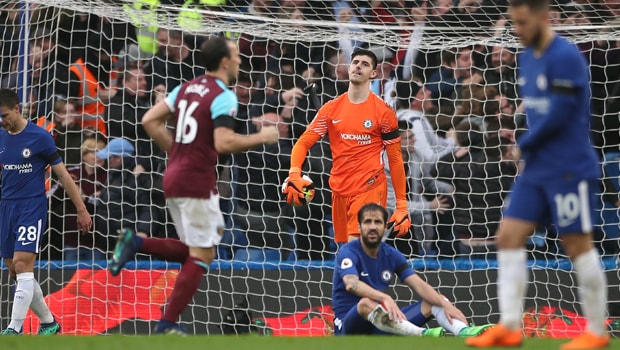 Chelsea goalkeeper Thibaut Courtois has once again hinted that he could move on this summer as he continues to be linked with Real Madrid.

The 26-year-old is currently on international duty with Belgium at the 2018 World Cup in Russia and boasts two clean sheets from his four appearances.

Belgium are among the favourites to go all the way after seeing off Japan in dramatic fashion on Monday to book their place in the quarter-finals for just the second time in the nation’s history.

His focus is undoubtedly on the upcoming clash with five-time world champions Brazil on Friday, but that hasn’t stopped rumours circulating over his domestic future.

The stopper has been on Chelsea’s books since he was snapped up from Genk in 2011, although he was immediately loaned out to Atletico Madrid for three-years in order to continue his development.

He returned to Stamford Bridge in 2014 to take the number one spot from Petr Cech and has been a regular in west London ever since.

However, it appears his time with Chelsea, who are priced at 13.00 to win the Premier League title in 2018-19, could be coming to an end with Real Madrid interested in his services.

Courtois has hinted on a few occasions that he could move on and his latest comments suggest that could happen this summer.

“I don’t only like Madrid, I also like London and they are two great cities,” Courtois said.

“The difference is that my kids are in Madrid, and they have seen the game and they see their father and they want him to be close.

“That is not to say I’m going back, but for me my kids are very important and I will do something to see them more.”