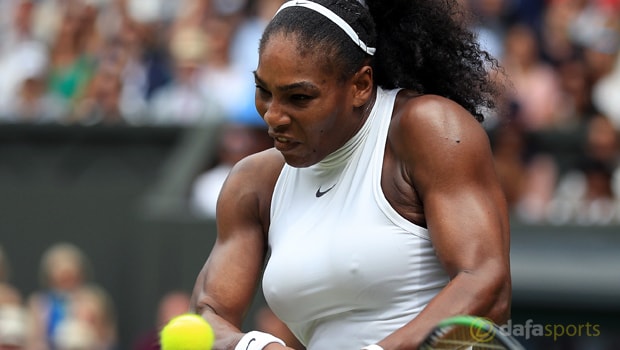 Serena Williams says she wants to win more Grand Slam titles before she retires but that she doesn’t ‘need’ them.

The American is already the most successful player of the Open era, her 23 Grand Slam titles leaving her just two away from surpassing Margaret Court’s all-time record.

Williams won the most recent of her titles when she defeated sister Venus to land the Australian Open a year ago, before taking time out to become a mother for the first time.

Having her daughter Olympia she says has taken away some of her on-court anxiety and, while the hunger is still there to succeed, she admits she doesn’t rely on success in the future.

“I don’t need the money or the titles or the prestige,” Williams told Vogue. “I think having a baby might help.

When I’m too anxious I lose matches, and I feel like a lot of that anxiety disappeared when Olympia was born.

“Maybe this goes without saying, but it needs to be said in a powerful way: I absolutely want more Grand Slams.”

Romania’s Simona Halep is currently the top-ranked player in the world, with Williams slipping to 23rd during her time away from the game.

Williams is missing the defence of her Australian Open crown in Melbourne later this month but she makes no secret of her desire to get back to top spot in the rankings.

“There hasn’t been a clear number one since I was there. It will be cool to see if I get there again, to what I call my spot – where I feel I belong,” she added.

Halep can be backed at 7.50 to triumph in Melbourne while Angelique Kerber is 9.50 to repeat her 2016 Australian Open success.