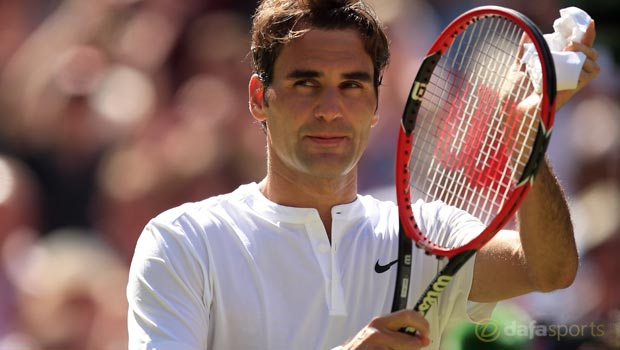 Roger Federer is happy with his form during the first week of Wimbledon after overcoming Sam Groth to reach the fourth round.

The Swiss superstar had to battle hard against the big-serving Australian, who fired the second-fastest serve in the history of Wimbledon, at 147mph.

The seven-time champion admitted afterwards it can take time to adjust to someone who can serve as powerfully as Groth, who also showed some deft serve-and-volley play, but Federer’s experience really came to the fore as he made it look simple at times.

Despite losing his first set of the tournament in the third, he broke Groth twice in the fourth to secure his progression into the second week at SW19.

Federer explained afterwards how he had to adjust his game to cope with the power serves and then ensure to concentrate on controlling his own service games.

He said: “He’s got a big serve and is a good mover coming forward, but I need to focus on my serving games and I dealt with that very well.

“I’m very happy with the way I played and I’m very pleased with the first week.”

Federer will meet 20th seed Roberto Bautista Agut in the fourth round on Monday after the 27-year-old Spaniard overcame Georgian qualifier Nikoloz Basilashvili 7-6 (7-4) 6-0 6-1.

He is trying to become the first man to win eight Wimbledon singles titles and, if things pan out as planned, then he should meet home favourite Andy Murray in the semi-finals. Murray is 3.25 to win Wimbledon, while Federer is priced at 6.50.