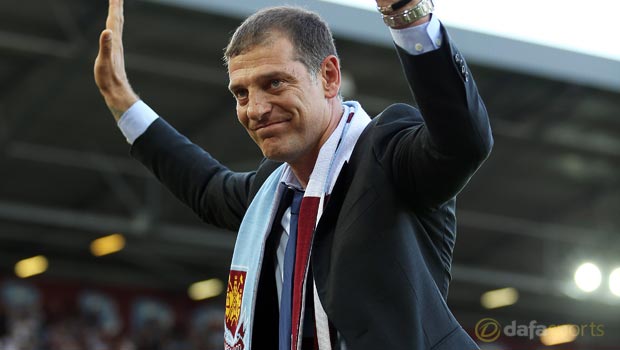 West Ham’s James Tomkins reckons Slaven Bilic has a “presence about him” that means he has already had a big effect in his short time with the club.

The Croat was named the Hammers manager at the start of June after spells as boss of Lokomotiv Moscow, Besiktas and the Croatia national side.

He controversially watched from the stands in midweek as two goals from Diafra Sakho and one from Tomkins secured a comfortable win over Andorran side Lusitanos in their first qualifying round tie for the Europa League.

Bilic was presented to the crowd at Upton Park before the match but it was actually academy director Terry Westley who oversaw the game, with the manager having just arrived in London from a training camp with those Hammers players not involved in the Europa League game.

Tomkins claims Bilic has definitely already inspired the West Ham players, due in part to his animated nature both on and off the pitch, and he has an overall presence around the club that great managers can bring.

“When he comes in the room, you can almost hear the silence. Slaven was a face here, wasn’t he? He’s a legend, even though he played only 30 or 40 games,” the 26-year-old told the Mirror.

“Why? I think it was the way he played, the passion he showed. He does that on the touchline as well. I have seen him with Besiktas and Croatia. It is the same. He is an animated man and that is what he was like on the pitch.

“That is what the fans like to see. I was only young when he was here, but I remember seeing him play and I know he loved a challenge! But he has that presence about him that good managers do.”

West Ham start the new Premier League season with a tough trip to the Emirates to face Arsenal. The hosts have been installed as 1.33 favourites for the win, while the Hammers are on offer at 9.00 and the draw is at 4.75.