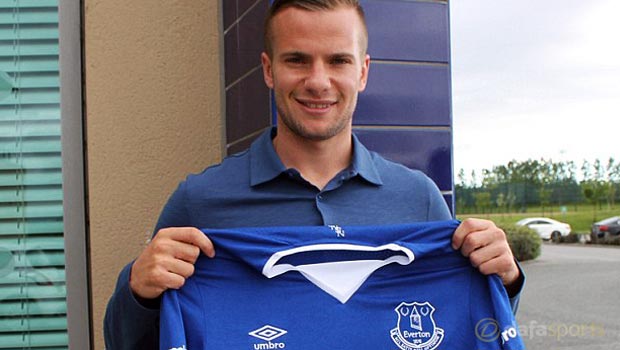 Tom Cleverley is aiming to hit the ground running at Everton and reckons familiar faces at Goodison Park could help him settle quickly.

The former Manchester United man signed a five-year deal to move to Everton last month as Roberto Martinez fought off competition from the likes of Aston Villa – where Cleverley was on loan last season – to sign the England international.

Cleverley told EvertonTV that there is a host of faces among the squad who he knows from throughout his career, including James McCarthy, who he played alongside at Wigan, Darron Gibson from his United time, and Phil Jagielka, Leighton Baines and Ross Barkley from England duty.

The 25-year-old is preparing to start pre-season preparations with his new club and is hopeful he can quickly find form and make a big impact at the club, while also impressing enough to get back in the England reckoning and join his Everton colleagues in Roy Hodgson’s camp.

Speaking about pre-season, Cleverley said: “I think joining early can definitely help me.

“I’ll be able to get my head around things and it will allow me to plan things and properly prepare for the season because I want to hit the ground running.”

Cleverley’s former United team-mate Gibson is reportedly set to be given a new two-year contract extension when he returns for pre-season training.

The Irish international has struggled with injuries since joining the club and the 27-year-old is set to enter the final 12 months of his current deal.

Despite failing to find consistent form since his arrival in January 2012, Gibson has reportedly impressed Martinez enough to be given a new deal with the club.

Everton open the new Premier League campaign with a home game against newly-promoted Watford. The Toffees are 1.70 favourites to win, with Watford at 5.00 and the draw at 3.60.