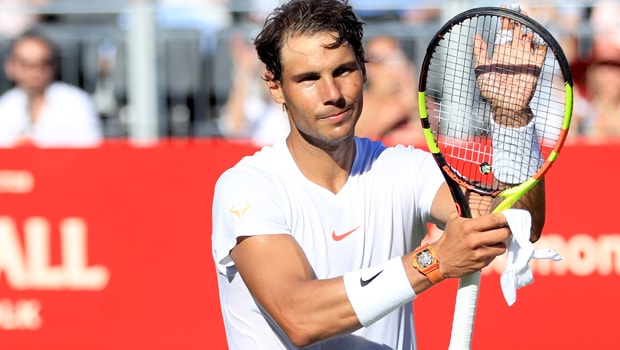 Roger Federer has been named top seed for Wimbledon and he feels long-term rival Rafael Nadal is the biggest threat to him defending his title at the All-England Club next month.

The seedings were announced on Wednesday morning and the 36-year-old Swiss has top billing, though Nadal replaced him as world number one at the start of this week.

Federer ended his four-year wait for a win at Wimbledon last summer when he defeated Marin Cilic in the final and will bid to win his ninth SW19 title and a 21st Grand Slam of his stunning career when the tournament begins on Monday.

Nadal, seeded second, has yet to play on grass since claiming his 11th French Open title on his favourite clay surface earlier this month, the Majorcan having elected to take some time out instead to recover from a tough clay-court campaign.

Nadal trails Federer by three Grand Slam victories, but the former feels he is going to be a big threat in London.

“I think Rafa is one of the big favourites,” he said. “When Rafa is healthy, anything is possible for him.”

Last year’s finalist Cilic, who won at Queen’s last weekend, is the third seed followed by Alexander Zverev, who is seeded fourth.

Two-time champion Andy Murray is absent from the seedings having only just returned from a near 12-month injury lay-off, while Novak Djokovic is seeded 12th after a year also interrupted by injuries.

Federer is the 2.70 favourite to win Wimbledon, while Nadal is currently 8.00 and Cilic is 7.00 to better last year’s effort.

Meanwhile, in the women’s draw, seven-time Wimbledon champion Serena Williams is the 25th seed for this year’s tournament, despite being outside the top 32 in the world rankings.

Williams, winner of 23 Grand Slam titles, has played only three tournaments in the past 12 months having taken time out to give birth and is ranked 183rd in the world.

Slovakia’s world number 32 Dominika Cibulkova has not been seeded for Wimbledon.