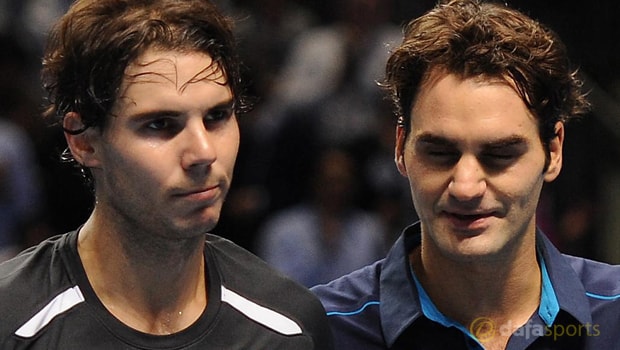 Roger Federer insists a “healthy” Rafael Nadal is always a threat and the Swiss legend expects his long-term rival to make a serious challenge for Wimbledon glory this year.

Federer has been in fantastic form over the past couple of years and he successfully defended his Australian Open crown in January, taking his Grand Slam tally to a record 20 titles.

The 36-year-old, who moved back to number one in the world recently, is gearing up for his defence at the All England Club next month and victory at SW19 would make it an unprecedented nine trophies at the grass-court event.

Question marks still remain over the fitness of Nadal ahead of the third Slam of the year after he opted to skip the warm-up tournament at Queen’s due to fatigue.

The ‘King of Clay’ landed a record 11th French Open crown at Roland Garros last time out and doctors advised the Spaniard to take a rest from competitive action to reduce the chance of picking up injuries.

Federer, who is the 2.50 favourite to win Wimbledon, insists Nadal, priced at 6.50 to triumph at SW19, is a threat in any tournament as long as he is fit.

“I think he is one of the big favourites to win there, regardless if he plays Queens or not I think the key for him is going to be the early rounds in Wimbledon,” he was quoted as saying by Tennis World USA.

“There is always a few difficult first-round draws as usual.

“But it is a big draw, a lot of players, anything can happen. And I think – like for any top guy – I think the first two rounds at Wimbledon are very important because the grass and the courts play so different to anywhere else in the world.

“So, that’s the key there. Look I’m sure he’s coming with confidence, he’s had an incredible clay court stretch and if he’s practicing already that means he’s healthy. When Rafa is healthy anything is possible for him.”