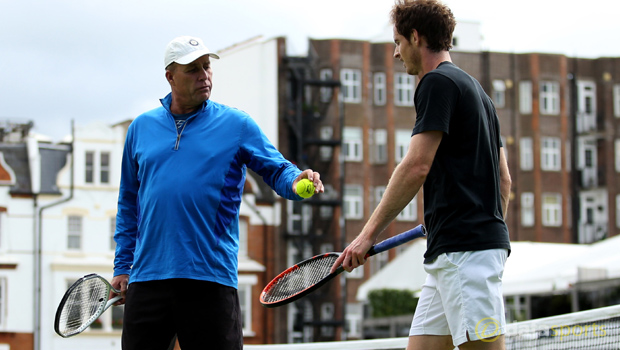 Ivan Lendl has vowed to help Andy Murray improve his game after returning to the Scot’s coaching team.

Eight-time Grand Slam winner Lendl is back at Murray’s side just over two years after they went their separate ways.

Murray recently split with coach Amelie Mauresmo and, with Wimbledon just around the corner, Lendl has been drafted back in.

Getting closer to world number one Novak Djokovic will be the primary target for Murray and Lendl, 56, who says it has been easy to slot back into the Murray camp this week at Queen’s Club due to the fact they had maintained contact since originally parting company in March 2014.

“Andy and I have talked over the last few years,” Lendl told BBC Sport.

“We’ve stayed in touch, and as you know, we parted on good terms.” The world number two battled past big-serving Nicolas Mahut 7-6 (10-8) 7-6 (7-1) to reach the second round at Queen’s in his first match with Lendl back in the players’ box.

Having previously enjoyed a run of success under Lendl’s guidance, Murray will have high hopes going forward after winning the Olympics, the US Open and Wimbledon during his original spell with the Czech-born American.

According to Lendl, there is plenty to work on in the run-up to SW19 as they look to edge closer to Djokovic. “Everybody can improve in almost every area – even Novak,” Lendl said.

“There are obviously things which we are going to work on which are more important than some others, but I’m definitely not going to be specific.”

Murray is 4.20 to win a second Wimbledon crown this year, with Djokovic 1.75 to continue his bid for a calendar Gram Slam.