St George ready to bid for Gold at Ascot 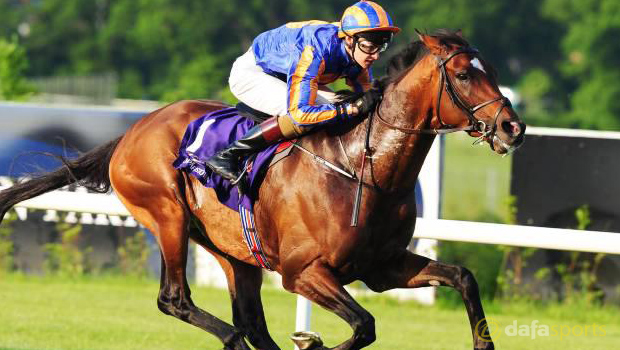 Connections feel Order Of St George is ready to mount a serious bid for glory in the Gold Cup at Royal Ascot on Thursday.

Trained by Aidan O’Brien, last year’s Irish St Leger winner has been prominent in the market for the two-and-a-half-mile Group One contest ever since impressing on his reappearance at Leopardstown early this month.

There he had plenty to spare over his rivals in the Saval Beg Stakes, just as he did last September at the Curragh when cantering to a wide-margin win in the Irish Leger.

Victorious on each of his last four starts, Order Of St George goes to Ascot with high hopes. O’Brien says his charge will handle soft ground ok, although he does have some concerns should the conditions underfoot deteriorate any more in the lead-up to the race.

“Order Of St George handles a dig but going that far, you wouldn’t want it too soft,” said the trainer.

“He is a class horse and was just ready to run when he ran in Leopardstown and hopefully he will have progressed from then.

He does handle an ease, though.” O’Brien will be seeking a sixth Ascot Gold Cup success, with no trainer matching his running tally.

Yeats won four in a row from 2006 while the Ballydoyle supremo was also responsible for 2011 winner Fame And Glory and Leading Light three years later.

Jockey Ryan Moore was not on board for any of those wins but he will be the man charged with bringing Order Of St George home in front this time around.

Moore’s only previous Gold Cup success came on Estimate for Sir Michael Stoute in 2013 and he says Order Of St George is a reliable performer going into this year’s race.