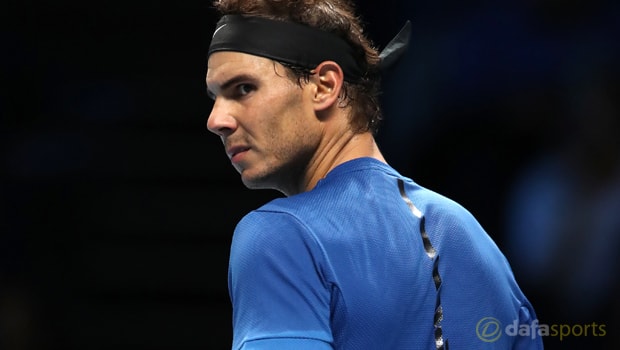 Rafael Nadal’s preparations for next month’s Australian Open have taken a further blow as he has been forced to withdraw from the Brisbane International due to an ongoing knee problem.

The Spaniard, who enjoyed a resurgent 2017, claiming Grand Slam glory at both the French and US Open, was forced to miss the end of season ATP Finals in November.

The world number one subsequently had to withdraw from the Mubadala World Tennis Championship in Abu Dhabi and has now confirmed he will also miss the opening tournament of 2018 in Brisbane, as he is still not ready to return to competitive action.

“I am sorry to announce I won’t be coming to Brisbane this year,” Nadal said on Twitter.

“My intention was to play but I am still not ready after last year’s long season and the late start of my preparation.”

Nadal’s withdrawal from the Queensland event means he will head into the Australian Open, which is due to get underway on January 15, with a lack of match practice.

The 31-year-old reached the final in Melbourne last season and has reassured supporters that he will be fit enough to compete at the first major of 2018.

“I had a great time there (in 2017) and it was a great start to the month I spent in Australia,” Nadal added.

“I will be seeing my Aussie fans when I land on the 4th in Melbourne and start there my preparation for the Australian Open.”

Nadal has only once claimed Australian Open glory, beating Roger Federer in the 2009 final, but he is priced at 4.20 to add to that tally this time around.