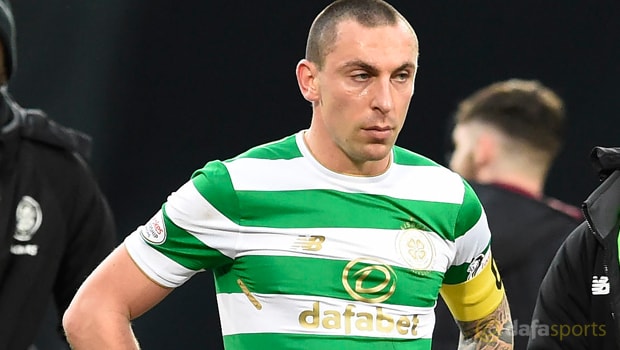 Celtic captain Scott Brown knows his side will have to be on top of their game if they are to beat an improving Rangers in Saturday’s Old Firm derby at Parkhead.

The Bhoys will head into the match eight points clear of nearest rivals Aberdeen at the top of the Scottish Premiership standings, while Rangers are a further three points back.

Celtic are also unbeaten in their last seven meetings with the Gers, but Brown is expecting a tough test against their rivals on Saturday, as he believes the blue half of Glasgow have improved considerably under the stewardship of Graeme Murty.

“I think they have improved under Graeme,” Brown told Sky Sports.

“I think he has done a good job with them. It was obviously hard job coming in to be caretaker.

“It is a huge game for us. It is at Celtic Park so we have got to make sure that we dominate the game.”

Celtic’s record-breaking 69-game unbeaten domestic run was brought to an end by Hearts earlier this month but since that setback, the Hoops have recorded three successive victories and Brown believes they have now fully recovered from the loss.

“Everyone is going to think after the Hearts game that if they press us high up the park and put us under a bit of pressure that we will bottle it,” he added.

“But, we have played against so many different teams that play different styles and philosophies that we can manage anything. That game [against Hearts] was just a one-off.”

Brendan Rodgers’ side are priced at 1.33 to secure Old Firm glory on Saturday, while Rangers are available at 8.50 and the draw is on offer at 5.00.