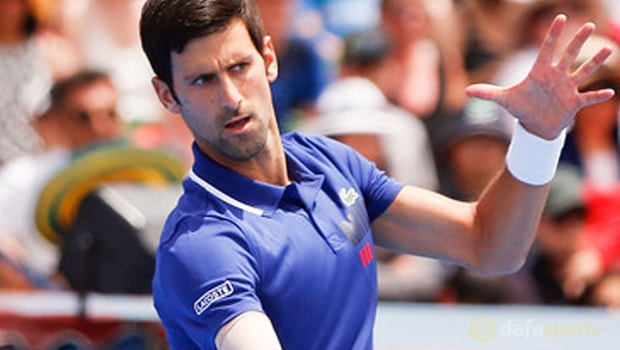 Novak Djokovic admits it is impossible to tell how his elbow will react as he prepares to return to competitive action in the Australian Open.

The 30-year-old Serb hasn’t played since retiring against Tomas Berdych in the quarter-finals of Wimbledon in July.

Djokovic has left his decision to play in Melbourne until the last possible moment and he admits that he isn’t quite at full tilt just yet.

Coming back from such a long layoff however, he says it would be impossible to predict how the comeback will go regardless of how he is feeling.

“It hasn’t yet been 100 percent healed but right now it’s at the level where I can compete,” he said. “Every day is getting better.

I’m hoping that it can be 100 per-cent at the start of the tournament. Throughout the tournament, I don’t know how it’s going to behave.

“Even if it’s 100 per-cent healed, after six months of no competition, you never know how you’re going to react.”

Djokovic will be seeded 14th in Melbourne and opens against American Donald Young on Tuesday.

Djokovic has won six times in Melbourne since 2008, amid a tally of a dozen Grand Slam titles overall.

The former world number one still has the fight inside to achieve more success in his 30s.

“The fire, passion, and love for the sport still burns inside. I have great support from my family and close ones and people around the world,” he said. “I do feel young inside, you know.”

Djokovic is 6.50 to win the Australian Open while veteran Roger Federer is 2.88 to defend the crown he won in stunning fashion in a five-set thriller against Rafael Nadal 12 months ago.