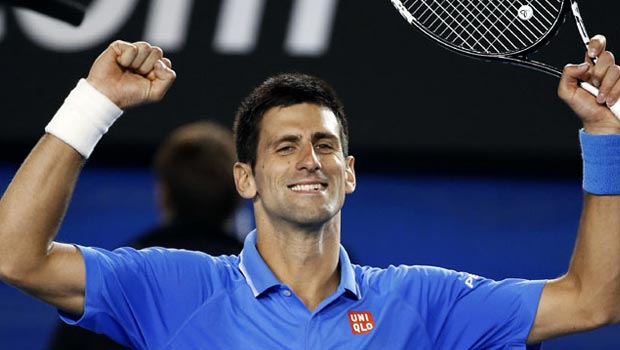 Novak Djokovic maintained his quest for a fifth Australian Open title with a dominant quarter-final victory over Milos Raonic.

The Serb was expected to be given a stiff test of his championship credentials by Canada’s Raonic, who had dropped serve just twice on his way to the last eight.

However, the eighth seed found Djokovic in formidable form and proved to be no match for the eight-time Grand Slam champion.

Defending champion Wawrinka had been equally as impressive as Djokovic earlier on Wednesday as he beat US Open finalist Kei Nishikori in straight sets, 6-3 6-4 7-6 (8-6).

The Swiss ace will now go up against Djokovic for the third year in a row in Melbourne, Wawrinka coming out on top last year on his way to his first major title.

Djokovic says he is ready for another epic encounter with Wawrinka and believes he can get the better of the fourth seed after his impressive win over Raonic.

“I take a lot of confidence,” said Djokovic. “I try to carry that in every next match, next challenge. Obviously I’m going to play Stan, who is the defending champion here.

“We played five-set matches in 2013 and 2014 Australian Open. I’m going to be ready for a fight. But knowing that I have raised the level of performance tonight, and probably playing the best match of the tournament so far is affecting my confidence in a positive way.

“Hopefully I can carry that into next one.”

The winner of the semi-final will face either Tomas Berdych or Andy Murray, depending on who gets through, in the semi-final, with the duo set to square off against one another on Thursday.