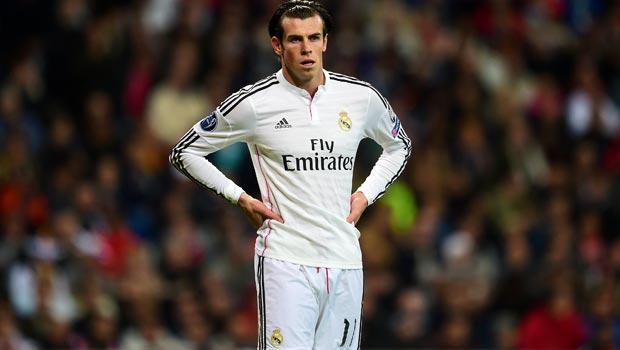 Gareth Bale has moved to end talk of a move to Manchester United by insisting he wants to stay with Real Madrid and win trophies.

The Wales international only moved to the Bernabeu in the summer of 2013, signing a six-year contract, and helped Los Blancos win the Champions League and Copa del Rey in his first season with the club.

However, speculation recently has suggested that United are ready offer goalkeeper David de Gea plus a sizeable cash sum in the hope of bringing Bale back to the Premier League.

Real are reportedly not opposed to the offer as they are desperate to sign De Gea, with Bale also said to be open to a switch.

However, the £85million signing has now moved to quash talk a move to Old Trafford, claiming he sees his future with Real.

“I can’t imagine myself at Manchester United,” he said. “In a recent interview they asked me if I was unhappy at Real and I told them I’m really happy here.

“I’ve got several years left on my contract, I’m enjoying myself, we’re winning trophies and I want to keep doing that here at Real.”

Real fans were upset with the Welshman when he did not set up Cristiano Ronaldo to score against Espanyol, instead going for goal himself.

Bale says talk of tension between himself and Ballon d’Or winner Ronaldo is nonsense and claims he still feels supported by the Real fans, despite their recent outburst.

“There is no rivalry,” he said. “We have meetings to talk about tactics. Normally if there is a free-kick from the left then Cristiano takes it and on the right it would be me. We get on well.

“I don’t think I’m greedy. On the pitch I make assists and score goals. I play the game how I like to play and the press can say what they want.”

Bale returns to action on Saturday when Real play host to Real Sociedad, a game Ronaldo will miss after his sending off last weekend against Cordoba.