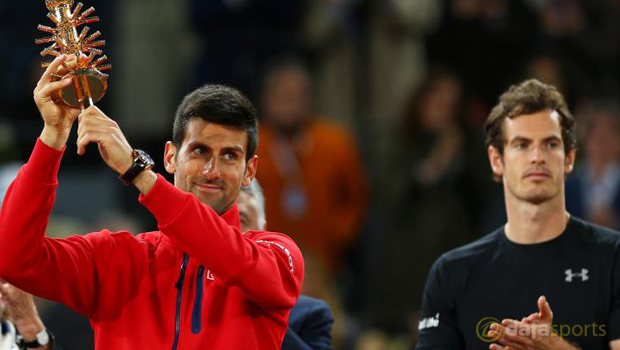 World number one Novak Djokovic continued his blistering form in 2016 with victory over defending champion Andy Murray in the final of the Madrid Open.

The Serb has already claimed six titles since the turn of the year, adding his Madrid win to the Qatar Open, Indian Wells, the Miami Open and the Australian Open, where he also defeated Murray in the final to land the first grand slam of the year.

Defeat to Djokovic in the final means Murray slips to number three in the world rankings, with Roger Federer now ranked second. It took Djokovic just over two hours to down the Scot 6-2 3-6 6-3 in Madrid, as he recorded a 15th consecutive win again players ranked in the world’s top ten.

Djokovic was winning a Masters 1000 Series title for the 29th time in his career, with the 28-year-old now having grabbed 10 of the last 14 on offer.

His stranglehold over Murray is also becoming more and more evident, the career head-to-head between the long-time friends now standing at 23-9 in favour of the Serb, with Murray managing just one win in the last 13 meetings.

Djokovic broke Murray three times in winning the opening set of the final, but Murray rallied strongly as he took the only set the world number one dropped in the tournament to level matters.

Djokovic had the answers however and, despite Murray forcing a succession of break points late in the third set, he served out the match to record another pleasing win with the French Open coming up later this month.

“It was a great match to be a part of,” the winner said. “Congratulations to Andy for a big fight. It was all decided by just a few points at the end.

“I don’t know how I dug my way out, but that’s how it happens when you play against one of the best in the world.
I’m just happy to have overcome this challenge.”

Djokovic is 1.75 to win his first ever French Open title in Paris while Murray is now 9.50 and Federer can be backed at 23.00 for clay-court grand slam success.