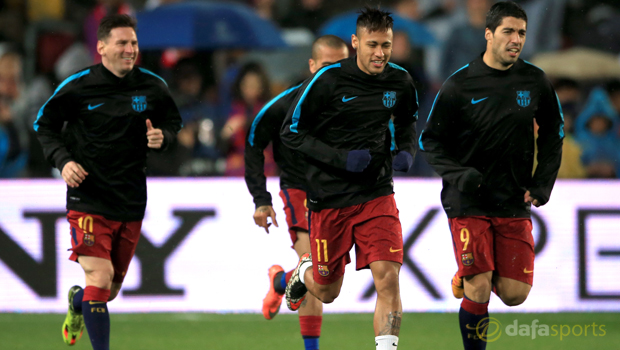 Barcelona are on the brink of retaining their La Liga crown after thumping Espanyol 5-0 in Sunday’s Catalan derby at Camp Nou.

Luis Enrique’s side will take a one-point lead over Real Madrid into the final round of La Liga matches next weekend.

Zinedine Zidane’s men got the better of Valencia in a five-goal tussle at the Bernabeu on Sunday afternoon but city rivals Atletico are out of the title race after going down 2-1 at already relegated Levante.

Fernando Torres gave Diego Simeone’s side an early lead but the home side were on terms before the interval and former Manchester United man Giuseppe Rossi scored the winner in stoppage time at the end of the game to crush Atleti’s title hopes.

There were no such worries for Barcelona however from the moment Lionel Messi curled in a delightful free kick on eight minutes to put them ahead against Espanyol.

Messi’s goal was the pick of the five from the home side, with Espanyol able to offer only token resistance thereafter.

Luis Suarez scored twice in nine minutes around the hour mark to put the game beyond Espanyol, who rather fell apart in the second half.

With Atletico now out of the equation, it means the title race is a straight fight between old rivals Barca and Real.

The champions are 1.10 to retain their La Liga crown with Real Madrid 6.50 to take advantage of any slip from Barca and win the title.