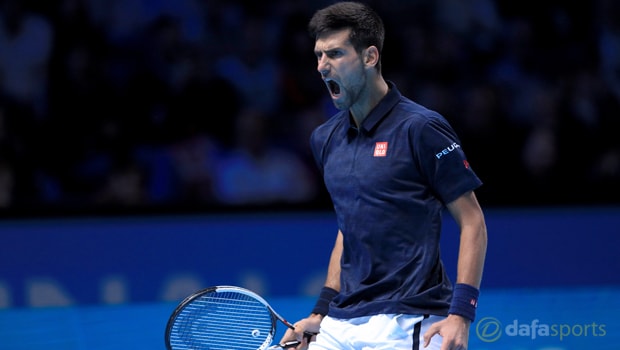 Novak Djokovic battled back from losing the opening set to defeat Dominic Thiem at the ATP Tour Finals in London’s O2 Arena.

The Serb, knocked off the top of the world rankings by Andy Murray last week, vented his frustration having lost a first set tie-break before storming back to win 6-7 (10-12) 6-0 6-2.

Djokovic felt he had played very well after losing the opening set but he was still forced to field questions about his temperament after he slammed a ball into the crowd at the conclusion of the first set tie-breaker.

The world number received a warning for hitting a ball in the direction of coaches Boris Becker and Marian Vajda, who were sitting in the stands, narrowly missing a spectator.

Earlier this year, Djokovic tossed away his racket during a French Open quarter-final win over Tomas Berdych, just avoiding a line judge.

He denies having any issue with anger management. “I’m the only player that shows his frustration on the court?” he said in a press conference afterwards.

“That’s what you are saying? It is not an issue for me. It’s not the first time I did it.”

Djokovic declared himself happy with the manner in which he fought back and gained control against Thiem. “I started swinging more freely in the second set.

I made him play an extra shot. He started making more errors, which I used,” he added. “I was on top of his second serves, putting a lot of pressure.

I thought I played very well in the second set especially, but the third as well.”