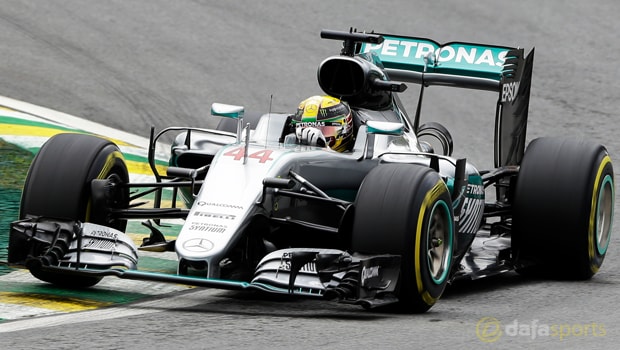 The British driver delivered a masterclass at a rain-soaked Interlagos on Sunday to win the Brazilian Grand Prix and maintain his hopes of overturning team-mate Nico Rosberg in the drivers’ championship.

The German need only finish in the first three in Abu Dhabi in a fortnight to claim his maiden championship success.

Despite winning in Sao Paolo, Hamilton was left frustrated at what he felt was a poor call from Red Bull when they called Max Verstappen into the pits to switch to intermediate tyres.

That move allowed Rosberg to regain second place and grab the all-important points that put him on the brink of a world title.

Hamilton has made no secret of the fact that ‘luck’ has been on the side of his Mercedes team-mate for much of this season and the world champion maintained that stance after his win in Brazil.

“Unbelievable, when will it end? Red Bull made such a big mistake with that call,” he told Sky Sports.

“When the team called me and said ‘people are starting to pit for inters’ I’m like ‘they’re crazy, there is no way it is going to last, they are going to have to pit again’.

That’s what they did and it is a shame. But there is nothing I can do about that.”

Hamilton is hoping that Red Bull can redeem themselves in a fortnight and help him grab a dramatic championship win.

“It would be good if they made some good calls in the next race,” he added. Hamilton is 4.50 to win the drivers’ championship, while Rosberg is 1.20.