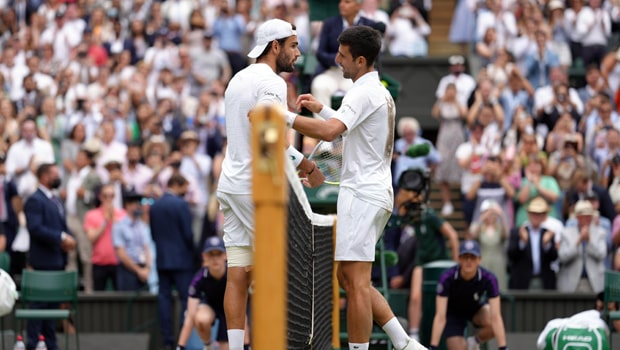 25-year old Matteo Berrettini was almost on the verge of becoming the first ever Italian to win Wimbledon in Gentlemen’s singles category. The only player standing in his way was none other than Novak Djokovic, who was also on the hunt for his 20th grand slam title. But even the larger than life status of  Novak could not scare Matteo.

The Italian began the final in perfect style. He was trailing 5-2 in the first set but somehow managed to take the game to the tie break and won it eventually. But Novak somehow managed to thumb Berrettini down in the next three sets and won his sixth Wimbledon title. The 34-year old Serbian defeated Berrettini 6-7, 6-4, 6-4, 6-3 to claim the 20th grand slam of his career.

Still the Italian was proud of his achievement and took comfort in the fact that he gave Serbian a good run for his money. He also added that this is certainly not the last time he has come to Wimbledon, “Well done Novak, he was better than me. He’s writing the history of our sport so he deserves it. I hope this is not the last time I come here”, said 25 year old Berrettini.

The Italian further thanked his family and friends in being the major supporters in his journey, “My family, my team, my friends, it’s been a really long path, a long journey, for me it’s not an end, it’s the beginning of a great career so without them all this wouldn’t be possible, so grazie and let’s keep trying”, further quoted 2021 Wimbledon runners-up.

Though Berrettini lost the game, he certainly got good support from the English crowd, despite being Italian, whose country will play England in the UEFA EURO 2020 final and Wembley later in the evening.

With such a huge achievement of reaching the final of Wimbledon and to give a good fight to Novak Djokovic, this is something he can add on to keep himself motivated to win tournaments in his career.