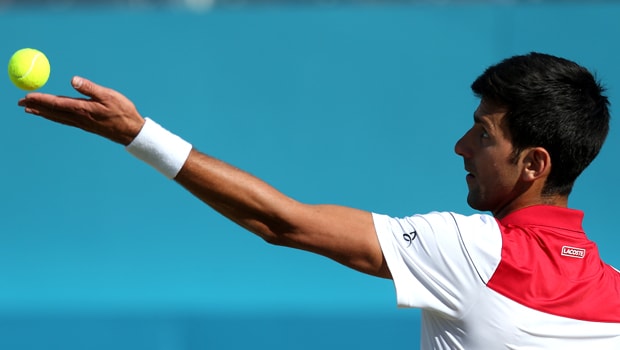 Novak Djokovic believes he can claim the Wimbledon title this year but says he isn’t among the favourites.

The former world number one is a three-time champion at the All England Club but after a lengthy spell on the sidelines with an elbow injury he is yet to rediscover his best form.

The Serb, now ranked as the world number 22, believes Roger Federer is the man to beat at SW19 and he says Rafael Nadal is also a real contender after he landed the French Open.

“Let’s not get too ahead of ourselves too early.

I’m definitely not one of the favourites for Wimbledon,” he told reporters.

“Roger is the clear favourite without a doubt. Nadal maybe hasn’t played well at Wimbledon by his standards, but he’s won it several times. He’s definitely one of the candidates to win the title.”

Djokovic feels he has an outside chance of taking the Wimbledon title, and he also believes Andy Murray could challenge despite the fact he has only recently returned from his own injury absence.

“Andy and myself if we play well [can be contenders].

We dropped in the rankings, but Andy played really well against Nick Kyrgios here [at Queen’s Club],” Djokovic added.

“He has home support, things can go in a good direction if he plays well at Wimbledon.”