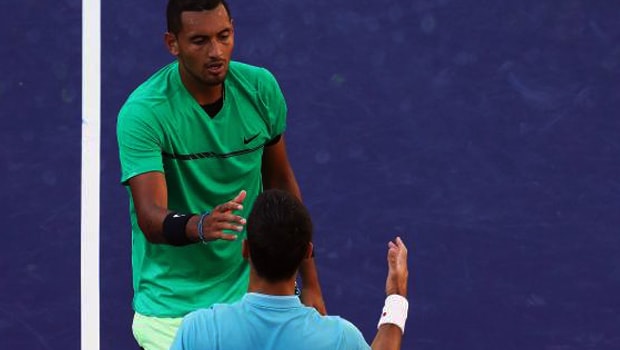 Nick Kyrgios has recorded his second victory over Novak Djokovic this month after securing a 6-4, 7-6 triumph in the fourth round of the BNP Paribas Open.

The Australian previously beat Djokovic in the quarter-finals of the Abierto Mexicano Telcel at the start of March and he proved that triumph was not just a one-off by recording another success at Indian Wells.

The 21-year-old fired 14 aces and did not face a single break point during the contest, and his reward for the success is a quarter-final showdown with 18-time major winner Roger Federer, who beat Rafael Nadal in his fourth round match.

Kyrgios admitted after the match that he was delighted to record another victory over defending champion Djokovic, who went into the contest having won three straight titles at Indian Wells, with his last defeat in the tournament coming against Juan Martín del Potro four years ago.

“He’s such a great player and professional and I knew it wasn’t going to be easy at all,” Kyrgios said.

Djokovic, for his part, was magnanimous in defeat, although he confirmed that he was disappointed his impressive run at the event had come to an end.

The Serbian has now failed to make it through to the semi-final stage of any of his last three tournaments, with his latest defeat seeing him lose further ground in the race to regain top spot in the world rankings.