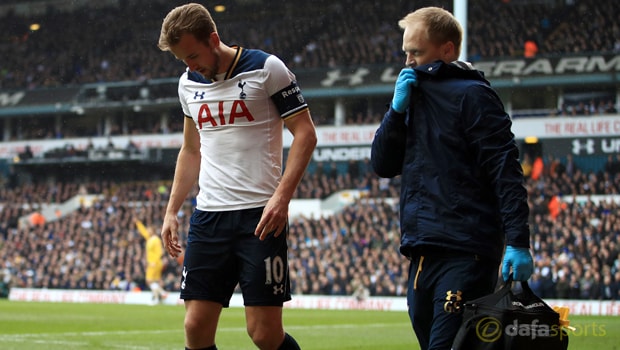 Tottenham Hotspur will have to cope with the absence of star striker Harry Kane for at least the next few weeks.

The England international, who has scored eight times in his last five games and 24 times in all competitions so far this season, lasted just 10 minutes of the 6-0 FA Cup sixth-round thrashing of Millwall at the weekend.

And Spurs have confirmed that Kane has suffered a similar injury to his right ankle as the one he sustained last September, which forced him to miss around seven weeks of action.

However, the Londoners are confident that this setback is not as serious, meaning that Kane should, hopefully, return to the fold in around a month.

A short statement from the White Hart Lane club confirmed: “Following further assessment the club can confirm that Harry Kane sustained ligament damage to his right ankle against Millwall.

“The injury is similar to the one suffered against Sunderland in September last year, however, it is not considered to be as severe.”

Kane certainly faces a race against time to be fit for the FA Cup semi-final showdown with capital rivals Chelsea on the weekend of 22-23 April.

This weekend Tottenham are back in Premier League action, when they welcome Southampton to White Hart Lane on Sunday.

In the absence of Kane, head coach Mauricio Pochettino is likely to hand a leading role to Son Heung-Min, who scored a superb hat-trick against Millwall.