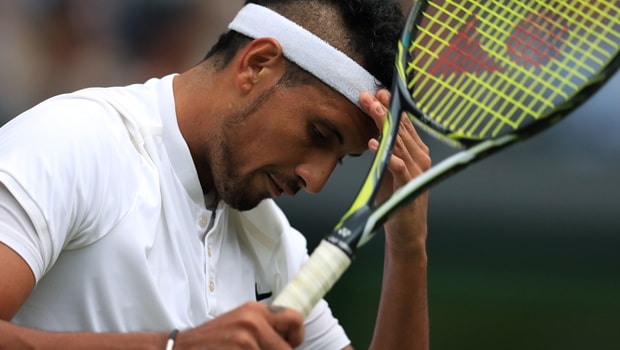 Nick Kyrgios made a winning return to the ATP Tour but he described his performance against Maximilian Marterer in the second round of the Mercedes Cup as ‘pretty average’.

The Australian, who is the fourth seed for the tournament in Stuttgart, secured a 6-4 4-6 6-3 victory over his German opponent in what was his first competitive match since injuring his elbow in the middle of April.

The 23-year-old was forced to miss the French Open with the injury, but despite winning on his return to action, he was not satisfied with the way he performed.

“It was a terrible match, the only thing that kept me in it was my serving,” Kyrgios said.

“Nothing went very well for me, the good thing is my elbow didn’t bother me.

“Basically, I didn’t feel great out there, today was pretty average. And the last three months have been brutal.”

Kyrgios will now be hoping to produce a better performance when he takes on Feliciano Lopez in the quarter-finals of the tournament on Friday.

Lopez booked his place in the last eight with a straight-sets victory over Gilles Simon, and the Spaniard, who is the eighth seed for the tournament, will be a tough opponent for Kyrgios, as he reached the final in Stuttgart 12 months ago.

Friday’s match will be the fourth meeting between the two players and Kyrgios, who is priced at 9.00 to win the Mercedes Cup, will be hoping to replicate the victory he achieved over Lopez at Wimbledon in 2016.