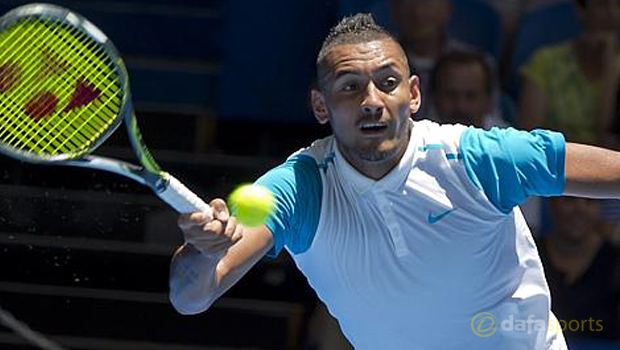 Nick Kyrgios’s Australian Open hopes were handed a major boost on Wednesday after the 20-year-old defeated Andy Murray in the Hopman Cup.

The Canberra-born star had never beaten the Brit in their previous four encounters and that record was tipped by many to extend to five in Perth.

However, the controversial Aussie, who is currently better known for his bad behaviour than his playing skills, produced a superb performance to record the victory in straight sets.

The world number 30 won 6-4 7-6 and the result will provide him with a huge amount of confidence ahead of the first Grand Slam of the season in Melbourne.

Kyrgios has never advanced past the quarter-final stage in one of the big four tournaments, while he was knocked out in the French, Aussie and US Opens last season by Murray.

Many are expecting a better showing from Kyrgios in the Slams this term and the youngster was delighted to get a morale-boosting win over a top-10 player.

“I actually did promise a couple of my friends that next time I played Andy, I was going to beat him,” he said. “He’s in the prime of his career. He’s been playing some great tennis. Every time I’ve played him I haven’t played bad.

“It doesn’t matter what type of match you’re playing, you always want to win. One hundred per cent he wanted to win that tonight. I thought it was a good match.”

Kyrgios is a 51.00 shot to win the Australian Open while world number one and defending champion Novak Djokovic is the firm favourite at 1.75.

Murray, a four-time finalist in Melbourne, is a 6.50 chance to go one better this year and Swiss legend Roger Federer is slightly longer odds at 9.00.