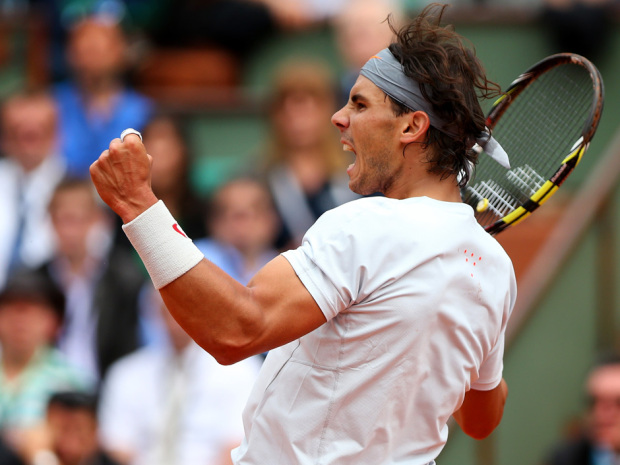 Rafael Nadal survived an early scare Monday and successfully began his bid for an eighth French Open title at Roland Garros by brushing off Daniel Brands of Germany, 4-6, 7-6 (4), 6-4, 6-3.

The Spaniard, who had lost only 14 sets in 53 previous matches in the tournament, fell behind when he was broken in the ninth game and was on the verge of crumbling in the red clay. He trailed 3-0 in the tiebreaker, then summoned his best shot-making to salvage the set and soon was in control against the 6-foot-5 Brands.

”He was playing unbelievable,” Nadal said. ”He was trying to hit every ball as hard as he can. Sometimes you feel you are not hitting a bad shot, and every time comes back a bomb. So I am very happy to be through, seriously.”

Nadal, who won a record seventh French Open title last year, improved to 53-1 at Roland Garros. He’s 37-2 since returning in February after a seven-month layoff because of a left knee injury, reaching the finals at all eight tournaments he played and winning six.

In the women’s side,  Maria Sharapova began her women’stitle defense with a 6-2, 6-1 victory over 42nd-ranked Hsieh Su-wei of Taiwan.

”I was too sure to win the point and lost a little bit of concentration,” the 59th-ranked Brands said. ”That shouldn’t happen against him.”