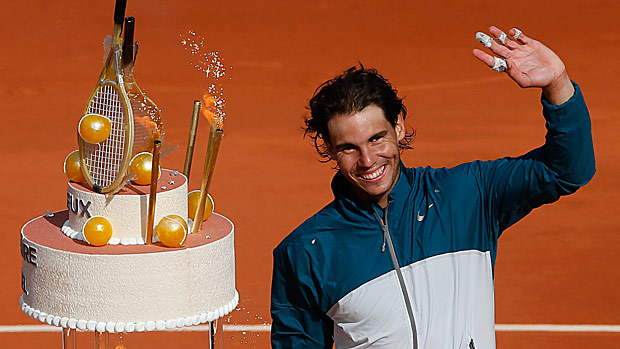 Rafael Nadal seems like the favourite to win yet another title in cruising past Kei Nishikori into the French Open quarterfinals.

Rafael Nadal enjoyed his 27th birthday as he finally looked like the strong favourite that he is to win yet another French Open title in cruising past Kei Nishikori into the quarter-finals.

The ‘King of Clay’ had looked far from worthy of the moniker after last week’s performance, losing the first set to both Daniel Brands and Martin Klizan, while the straight-sets win over Fabio Fognini was also a little flattering.

However, the mark of a champion is to win when not playing well and Nadal showed why he is the man to beat with a routine 6-4 6-1 6-3 win over the 13th seed from Japan.

The Spaniard took a while to get going in his fourth-round match against a man who was looking to become the first from Japan to make the last eight since Jiro Satoh in 1933.

The left-hander from Mallorca managed to stave off break points in the opening set and, having secured a break of his own in the fifth game, managed to take control of the contest inside 45 minutes.

Nishikori had more opportunities to break at the start of the second but failed to take them and was made to pay as Nadal started to prey on his opponent’s suspect backhand side.

The third seed used his more consistent power and finesse from the baseline to devastating effect and he booked his progress with the minimum of fuss.

Nadal has only ever lost once in Paris – to Robin Soderling in 2009 – but is perhaps now hitting the form needed at just the right time as he bids to become the first man to win the same Grand Slam event eight times.

Standing in his way in the last eight is either seventh seed Richard Gasquet or ninth seed Stanislas Wawrinka, before a potential mouth-watering clash against Novak Djokovic in the semi-finals.