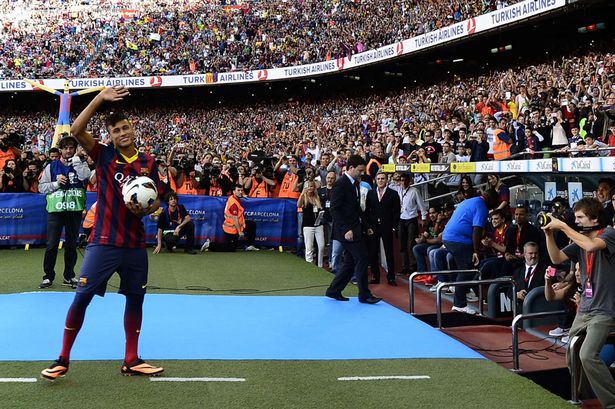 Neymar da Silva was expected to complete a reported £50m move from Santos to Camp Nou.

Throngs of well-wishers and die-hards rushed to El Prat Airport on Monday to get a glimpse of Barcelona’s latest superstar acquisition and in true A-list style, he arrived fashionably late.

Brazil international Neymar da Silva, or Neymar as he is widely known, was expected to complete a reported £50m move from Santos to Camp Nou and follow an illustrious thread of Samba Stars to have graced the Catalan capital.

The likes of Romario, Ronaldo, Rivaldo and Ronaldinho enjoyed distinguished careers for Barca and the 21-year-old said leaving his homeland to chase La Liga, Champions League and Copa del Rey honours was the realisation of a childhood wish.

“It?s my dream to play for Barça. I thank God for making this possible. Playing with [Lionel] Messi, Xavi and [Andres] Iniesta is an honour, ” he tweeted.

His arrival is the envy of clubs across continental Europe and he will now compete for a place in an attacking department laden with marquee signings.

There can be no doubting Neymar’s qualities – he hit double figures in seven out of 10 seasons for Santos – but his transition from the comfort zone of Brazil to the more demanding European stage will be intriguing.

Critics have already labelled the pencil-thin livewire a “YouTube player” and to silence those who have questioned whether he is all style and no substance he must adapt quickly – not an easy task in the unforgiving Primera Division.

Barcelona scored 115 goals in La Liga last season – 12 more than nearest challengers Real Madrid which begs the question why sign another striker? Interestingly, for those who would argue the money would have been better spent on overhauling a questionable defence, the figures show only one team conceded fewer goals than Barca – Atletico Madrid.

None of this will matter if Neymar delivers on his promise and the Mogi das Cruzes-born star can return the club to European glory.