My serve didn’t have the spark, says Daniil Medvedev after losing against Alexander Zverev 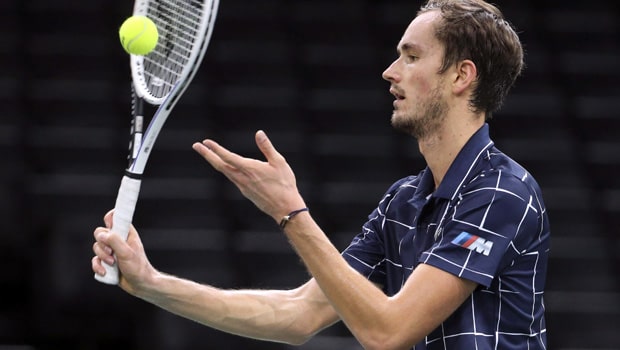 The World no.2 Daniil Medvedev admitted that his serve didn’t have the spark against Alexander Zverev in the final of the Nitto ATP Finals on Sunday in Turin. The German defeated the Russian in straight sets by 6-4, 6-4 to clinch his second Nitto ATP finals title. Thus, Medvedev could not defend his title after Zverev come out with his best.

Medvedev had beaten Zverev in the group stage but the Russian could not bring his best to the table when it mattered the most in the all-important final. Furthermore, Medvedev had gotten the better of Zverev in the last five meetings but the German was finally able to turn the tables.

“It’s tough to say, maybe some tiredness of the body, maybe mentally I wasn’t 100 per cent,” said Medvedev, after Zverev won 6-4, 6-4 in the final. “Not that I didn’t want to be, but definitely something was missing. I don’t have the answer, but it made the difference.

“Even when [my serve] was going on the line, it didn’t really have that spark. It wasn’t enough for Sascha, who is a great player and broke me two times. Sometimes, in a way, it’s not bad, but when you’re playing in a big final on a fast surface against someone who is serving like Sascha, it’s enough to win the match. We can talk about many things, but the serve was definitely the key today, and he was better.”

Medvedev admitted that he could not return Zverev’s serve and it gave the German advantage against him.

Meanwhile, despite the loss in the Nitto ATP finals, Medvedev had a great run in 2021 as he will finish at number two in ATP rankings. Medvedev had a 58-13 record in the season and also won four titles, the most important of them came in August when he lifted his first Grand slam title, the US Open.