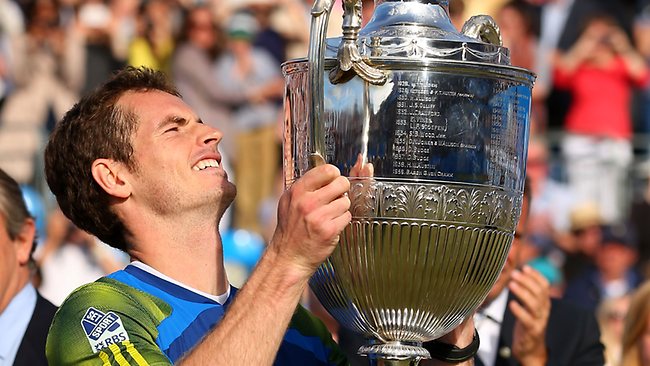 Andy Murray was given a thorough workout by defending champion Marin Cilic and managed to shrug off an injury scare.

Andy Murray was given a thorough workout by defending champion Marin Cilic and managed to shrug off an injury scare as he sealed his third AEGON Championships at Queen’s on Sunday.

The British number one raced into a 4-1 lead only for Cilic to fight back in stunning fashion on his way to taking the first set, with the Scot taking a nasty tumble in the eighth game.

Murray appeared to injure his groin after slipping when changing direction but insisted that the scare was not too serious, with Wimbledon just around the corner.

“It has been extremely wet – and I just slipped,” Murray told the BBC.
“I was a bit sore in the groin area, thankfully it wasn’t too bad.”

That news will have come as a relief as the 26-year-old has only just returned from a back injury which forced him to miss the French Open, and he eventually settled in to the contest on Sunday to claim the trophy, beating Cilic 5-7 7-5 6-3.

Murray paid tribute to his team for helping him get back into shape following his injury as he improved his head-to-head record against Cilic to 9-1.

“I worked very hard in the time that I had off to try and get myself back in the best shape possible,” Murray added.

“My team helped me a lot, they were patient with me and it’s why I was able to come out and play so tough in last couple of matches.

“He (Cilic) is one of the best grass court players in the world. We’ve played each other since juniors. We had a lot of close matches and I was lucky to come through at the end because he was playing such good tennis. He played very well.”

Murray should be full of confidence going into the year’s third Grand Slam event, having made the final last year before avenging his defeat to Roger Federer by taking Olympic gold at the same venue.