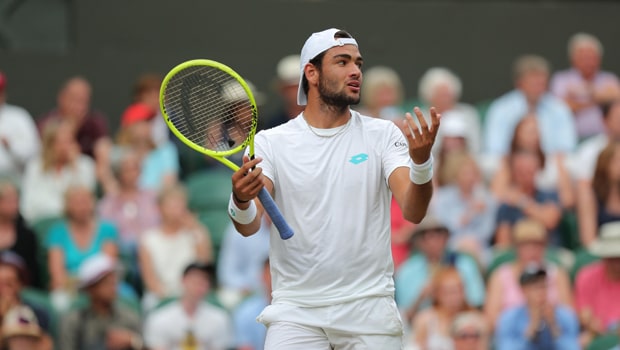 Wimbledon 2021 runners-up Matteo Berrettini has decided to pull out of the upcoming Tokyo Olympics due to a thigh injury. The Italian took to his Instagram handle to inform his fans that he will be out for a few weeks due to injury and won’t be able to represent the country in the upcoming Games.

Berrettini reached his maiden Grand slam final at Wimbledon 2021 but could not cross the final hurdle against Novak Djokovic and lost in four sets. The World No. 8 has impressed with his skills in the recent past and he would have definitely been one of the medal prospects for Italy.

“I am extremely disappointed to announce my withdrawal from the Tokyo Olympic Games,” Berrettini wrote on Instagram. “I had an MRI scan yesterday on the thigh injury I sustained during Wimbledon and was informed I will not be able to compete for a couple of weeks.

“Representing Italy is the biggest honour for me so it is devastating to miss the Olympics. I wish the entire Italian team the best of luck in Tokyo. I will be supporting you all the way.”

Berrettini will join players like Roger Federer, Rafael Nadal, Denis Shapovalov and Juan Martin Del Potro, who have already decided to withdraw from the quadrennial Games.

Matteo Berrettini’s coach Vincenzo Santopadre revealed that the Italian suffered the muscle injury during his semifinal match against Poland’s Hubert Hurkacz. Furthermore, the injury aggravated in the summit clash against Djokovic.

“Matteo got this muscle trouble when he crashed during the Wimbledon semi-final,” Santopadre told Gazzetta Dello Sport.

“Then obviously he pushed himself in the final and already felt pain from Monday. Fortunately, it is not the abdominal problem he has suffered from in the past. In that case, the recovery would have been much longer and more delicate.”